I know what you’re thinking: It’s the end of January already. Why are we still talking about 2017? Well, because sometimes life gets in the way and you have to power through. So, with that being said, I’m here to tell you about my favorite books of 2017. If you haven’t read any of these yet, check them out and pick up a copy!

The Hate U Give-Angie Thomas

In one of the first books focusing on the Black Lives Matter movement, Thomas’s story follows Starr as she navigates through life in the weeks and months following her friend Khalil’s death by the hands of a police officer. She’s torn between the two versions of herself, the Starr at home and the Starr at her white suburban prep school, and can’t figure out how to be both and deal with the tragedy that she witnessed. She wants to seek justice for her friend, to fight the bias plaguing our nation and to figure out where she fits into everything.

I thought this was just an unbelievable book. I mean, truly something spectacular. It was gripping and intense, soft and familial. It was a look at how America treats people based on the color of their skin or their place in life rather than who they are as a person and what they offer to the world.  I could not put it down and about lost my mind when I discovered it was being turned into a movie. I could not recommend this book enough.

Text Me When You Get Home-Kayleen Schaefer

Okay, technically this is a 2018 release, but I was lucky enough to get an advanced copy a few months ago. I cannot say enough about this book. It’s an in-depth look at the female relationships we create and cultivate over the course of our lives. Sometimes they’re finite and sometimes they’re forever, but this friendships, these enriching relationships, offer us a soft place to land when there isn’t one, a shoulder to cry on, a dress to borrow, a late night drink and an early morning breakfast, a phone call when you need it and a person to just understand who you are and what you need. It spoke with authors, writers (there is a difference), actresses, friends and family of Schaefer and so many more women about the power of their girlfriends. It was just so fantastic. A must pick up when it’s released on February 6th!

This is a book lover’s absolute dream. Have you ever just talked to your books? Screamed at the characters or pulled them off the shelves and said, “I just have to break up with you”? This collection of letters and lists has librarian Annie Spence telling the books she loves, hates, and needs to part with exactly how she feels. It will lead you to books you have never even heard of both in the letters and in the lists in the back and have you wondering how you didn’t know about that specific book before. I laughed, I screamed, “OH MY GOD, SAME!” and requested books from my local library. This will have you entertained from start to finish.

The Sun is Also a Star-Nicola Yoon

The story predominantly follows Natasha as she fights to keep her family from being deported back to Jamaica and Daniel, the boy she accidentally runs into and is looking for a sign from the universe that the Ivy League isn’t for him and neither is being a doctor. In the course of one day, they change each other’s perception about life, love, family, fate and how the universe works.

I’m being vague on purpose as this is one of those unable-to-put-down books. I read this in a day without even trying. It was so beautiful, so thought provoking that I cried no less than three times. It was just so incredible and I think this should be a must read for everyone. 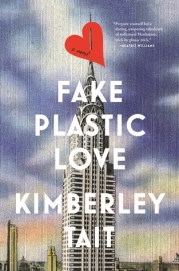 In the same vein of the movie Ingrid Goes West, Fake Plastic Love looks to capture the essence of the Millennial generation and its deep complexities. It’s a dichotomy of nostalgic looks back and realistic looks forward. It’s a generation of dreamers and romantics, determination and drive. M has never colored outside of the lines and her college bestie Belle Bailey has always used the entire box and drawn her own picture. But who she is and who M believes she is are facades; facsimiles of of what the world wants us to be, but who we aren’t. Not really. M must navigate the real world with a walking, talking Instagram post as a best friend and a love story that she feels she doesn’t deserve. Set against the backdrop of the financial district of NYC, this story will resonate with any Millennial.

I really did love this book. I thought it was unique in its interpretation of our generation. So few books, movies, TV shows, etc, really capture the essence of Millennials; the struggles we face and the constant push and pull of so many different influences and ideas of who we’re supposed to be. I thought this was just really fantastic.

Similar to the struggle of finding books that fully capture the Millennial generation, I sometimes find it difficult to find a book that truly captures what it’s like to deal with mental illness, the issue at the center of Chemistry. The narrator, as she’s never named, has a nervous breakdown while trying to get her doctorate in chemistry. She loses herself, her boyfriend, the respect of her parents. She gains weight, drinks heavily and isn’t sure if she made the right decision. But she’s so much more than chemistry. Her life can be lived outside of a lab. She can find success in another field. Or is all of that just a lie?

I loved the flow of this. There weren’t proper chapters, but rather page breaks throughout. I loved the pacing and the confusion that you felt palpably off of the page. It doesn’t shy away from the ugly aspects of depression, of anxiety disorders and stress. The book details mental health really well and it’s actually believable. It doesn’t feel like someone researched it and said, “Yeah, this will work.” It’s something truly special. 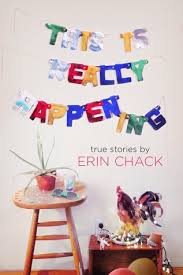 This is Really Happening-Erin Chack

This debut collection of essays takes you through the Buzzfeed writer’s awkward adolescence, the beginning of her decade plus long relationship, menstrual cups and what it’s liked to look at the famous website. Her voice is relatable, her writing is humorous and it’s a quick read you will absolutely enjoy having picked up. It was fun, it was quirky, it was a nice pick-me-up if you’re in need of one. 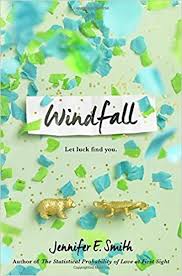 I am a colossal Jennifer E. Smith fan, so when this book was released, I promptly flew to the bookstore to buy it. It’s the story of Alice and her deep love for her bestie Teddy. You know, before he wins the lottery. Because he totally wins the lottery. She’s always felt like an island in her family, the orphan her aunt and uncle took in. She’s never felt like she’s had a place in the world that was truly hers, truly home. Everything has been dictated by her parents’ deaths. Who is she without that? Who is she when she’s not just an orphan or a volunteer or in love with someone who won the lottery?

Ugh, I loved this book. Maybe because it was set in Chicago, but also maybe because I just really love Smith’s look at adolescent love in a way that isn’t cheesy or over the top. It’s realistic and complex and there’s a scene with Alice and her aunt at Northwestern that really rocked me to tears. This is also becoming a movie, so hurry up and read it!

While I read many other books in 2017, these were my favorite new releases (even if I bent the rules for The Sun is Also a Star as it’s a late 2016 release) and books that truly moved me out of all of what I read. It was a good year for books and this year is shaping up to be even better. I can’t wait to see what 2018 gives me!

What were your favorite books of 2017? Let us know here or on Instagram!